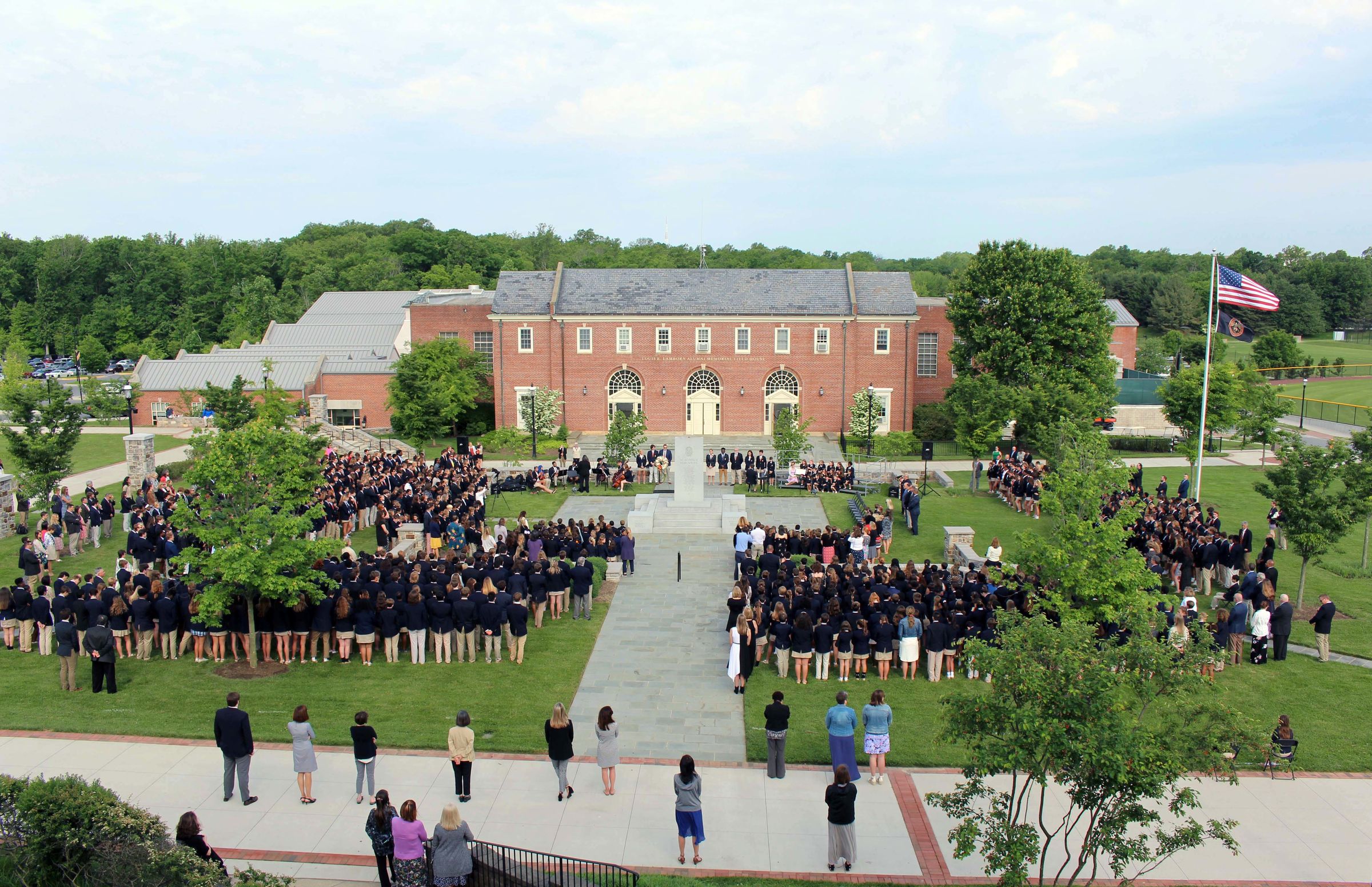 The entire school community, Trustees, retired employees, and alumni gathered in silence on Memorial Court for McDonogh’s 73rd annual Memorial Day ceremony on Thursday, May 23. The solemn occasion, which remembers and honors those members of the McDonogh Family who lost their lives in service to our country, was punctuated by music performed by the Upper School String Ensemble and the Lower School Concert Choir.

Head of School Dave Farace ’87 began the ceremony with a warm welcome. After the invocation, which was introduced by Denzel Babila-Pinyin ‘20, Director of Character and Service Bridget Collins '90 used the occasion to share the story of John J. Zeugner III, ’32. She said “Jack” entered McDonogh in tenth grade and found it very challenging. His days at McDonogh were not unlike those of today’s students. He was a hard worker, played three varsity sports, and was a member of the debate team. He went on to Brown University and later became a member of the 104th Observation Squadron of the Maryland National Guard. When the US entered World War II his squadron was called to duty. While being transported to Italy on the S.S. Paul Hamilton, on April 20, 1944, a German aerial torpedo struck the ship 30 miles off the coast of Algiers in the Mediterranean Sea. Because the ship was also carrying explosives and bombs in its cargo area, the torpedo strike caused a massive explosion. The ship disappeared in 30 seconds and there were no survivors. Jack Zeugner and 579 other men were lost. Read the full story here.

Collins shared that Zeugner’s name is one of 70 etched on the monument and said, “His family did not have a cemetery or a gravestone that they could visit to remember Jack. They had one place...McDonogh, his beloved school.”

Following the interlude When the Angels Call Me Home, Collins introduced the poem The McDonogh Uniform which was recited by Ken Waller ’65, Emily Armero ’20, Adam L. ‘23, and Jacqueline H. ’27. She explained that the poem was written by Eustace Glascock, a member of the McDonogh Class of 1879; and said that when Memorial Court was dedicated in 1946, Glascock was present at age 85 to recite his poem to begin the ceremony.

The 2019 Memorial Day ceremony concluded with Alumni Association President Jason Schwartzberg ’99 and rising Senior Class President Jesse Plank, placing a wreath at the monument to honor our McDonogh veterans. After Taps and the benediction introduced by Caitlin Hoffman ’20, the student body dismissed in silence as the Upper School Strings played Finlandia.

Throughout the rest of the day, students and guests visited the Rogers Lobby in the Edward St. John Student Center, where Butch Maisel ‘72, a military historian, displayed an exhibit that focused on John J. Zeugner III. The exhibit included photographs as well as a collection of original artifacts related to Zeugner's unit.

arrow_backPrevious Story
Fourth Graders Put Passions on Display
Next Story arrow_forward
What is The Good Life?