The Memorial to the Enslaved and Freed - McDonogh School
Download
Close

The Memorial to Those Enslaved and Freed

Planning for a memorial to recognize and honor the enslaved people of John McDonogh has been in the works for nearly two decades. The journey began with the work of a passionate group of teachers who felt it was important to remember the men, women, and children whose labor contributed to John McDonogh’s wealth—the very wealth that led to the founding of McDonogh School.

There has been a lot of thoughtful planning to ensure that the memorial, designed by retired Art Department Chair Oletha DeVane, is a place for members of the McDonogh community—now and in the future—to remember and reflect, learn and question, and gain a deeper understanding of this complex period of history.

The Memorial to Those Enslaved and Freed was dedicated during a special ceremony attended by faculty, staff, and students on April 19, 2022.

Oletha DeVane, an expert arts educator, was a faculty member at McDonogh School for 27 years before retiring in 2020. In addition to her work with students, she served as the Upper School Visual Art Department Chair and Director of Tuttle Gallery. A professional artist, her work has been shown in numerous solo and group exhibitions throughout the world, and she has been commissioned to create original artwork by several institutions including The Reginald F. Lewis Museum of Maryland African-American History & Culture and the DC Homewood Museum at Johns Hopkins University. She has exhibited at The Meyerhoff Gallery at MICA, The Corcoran Gallery of Art in DC, and the Baltimore Museum of Art (BMA), where she had a solo exhibition of her spirit sculptures, one of which was recently purchased and placed in the museum's permanent collection.

DeVane’s community engagement includes service on several boards, including Maryland Art Place, Wide Angle Media, and the Build Haiti Foundation. She is the recipient of the 2017 Ruby Foundation Grant, the 2021 Anonymous Was a Woman Award, and the Art Matters Fellowship in NY in recognition of her work involving communities for social change.

In June 2020, DeVane was commissioned to design and fabricate The Memorial to Those Enslaved and Freed. She also recently received a commission from the Municipal Art Society of Baltimore to create an outdoor sculpture for the newly renovated Lexington Market.

Elements of the Memorial

The memorial is an outdoor garden space, oval in shape, defined by a low brick wall on which people are welcome to sit and reflect. It was designed to be accessible to McDonogh’s PK to twelfth-grade population and provides an opportunity for people to have real conversations and learn about this period in history.

Ascend Sculpture
Positioned in the center of the garden is a multi-layered sculpture called Ascend. It is approximately 14-feet tall and was forged out of both polished and matte steel by A.R.T. Research Enterprises, an art casting and art fabrication company in Lancaster, PA. It is not only a singular element in the space but something that draws on the environment as well. It is designed to encompass the colors in the garden and landscaping and reflect it back.

Water Element
Water is used as an element of transcendence and sacred reflections. The water is a reference to the waterways of Louisiana and the transatlantic slave trade from which free and enslaved people from four continents emerged.

The wall inside the garden features water cascading over the engraved names of 95 people enslaved on John McDonogh’s three plantations—Allard, McDonoghville, and St. Gem—at the time of his death. The 118 other names are people who were manumitted by McDonogh to the American Colonization Society colony of Liberia. They sailed aboard the Mariposa in 1842 and the Rebecca in 1859.

Landscaping
In addition to a sweetgum tree, the area will feature a colorful purple plant similar to indigo—a crop from West Africa used for dye that is also planted in the South.

A glass aggregate incorporated in the pathway reflects light and is a reference to sky and water. The sculpture features some polished steel to reflect the landscape and the pathway.

Understanding History and the Memorial to the Enslaved and Freed

In preparation for the dedication of The Memorial to Those Enslaved and Freed, students in all three divisions are engaged in a series of thoughtfully-created lessons designed to give them a developmentally appropriate understanding of the memorial and history around it. Through discussion, hands-on activities, and reflection, students and teachers are investigating the following themes:

In March, the entire McDonogh community was invited to learn more about the memorial during a discussion with artist Oletha DeVane and art historians/consultants Dr. Leslie King-Hammond and Dr. Lowery Stokes Sims. The event was part of McDonogh Voices: One School. Many Perspectives—a multi-year series of learning and discussion opportunities designed to give stories about our past a greater voice in McDonogh’s present and future.

The Memorial to Those Enslaved and Freed will continue to be a place for the McDonogh community to remember and reflect, learn and question, and gain a deeper understanding of this complex period of history. 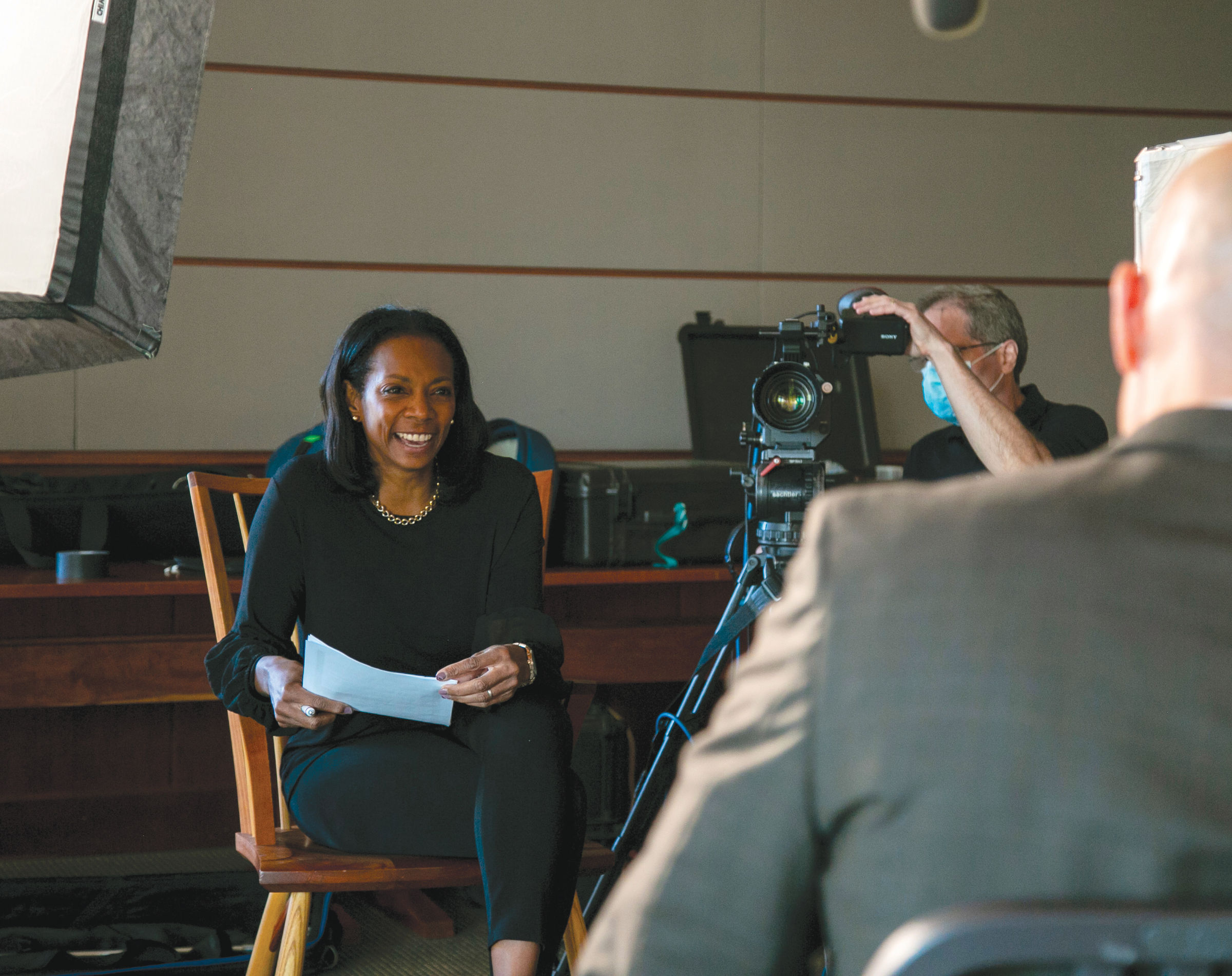 filmmaker, and writer is the producer of a documentary film about the creation of the memorial to honor the enslaved peoples of John McDonogh. The documentary was premiered following a special dedication of the Memorial during Reunion Weekend 2022.

Hamilton, who learned to think critically at McDonogh, says she discovered her love for journalism at Duke University. She credits her English professors with helping her become a stronger writer and storyteller and putting her on the path to journalism. She earned two master’s degrees, one from New York University with a concentration in broadcast journalism and a second in public administration from Harvard University’s John F. Kennedy School of Government with a focus on public policy and media.

She began her journalism career as a television news reporter. After several years of covering crime and weather, she began to produce feature stories for Black History Month. In 2012, Hamilton founded her own company, ARound Robin Production Company. Working at the intersection of media and policy, she says her work is guided by the principle of providing information that can promote transformation.

"This memorial offers countless opportunities for reflection and learning. In the weeks, months, and years ahead, I hope that everyone in our school community will spend time here and remember those whose forced labor paved the way for each one of us to make a positive difference in the world.”