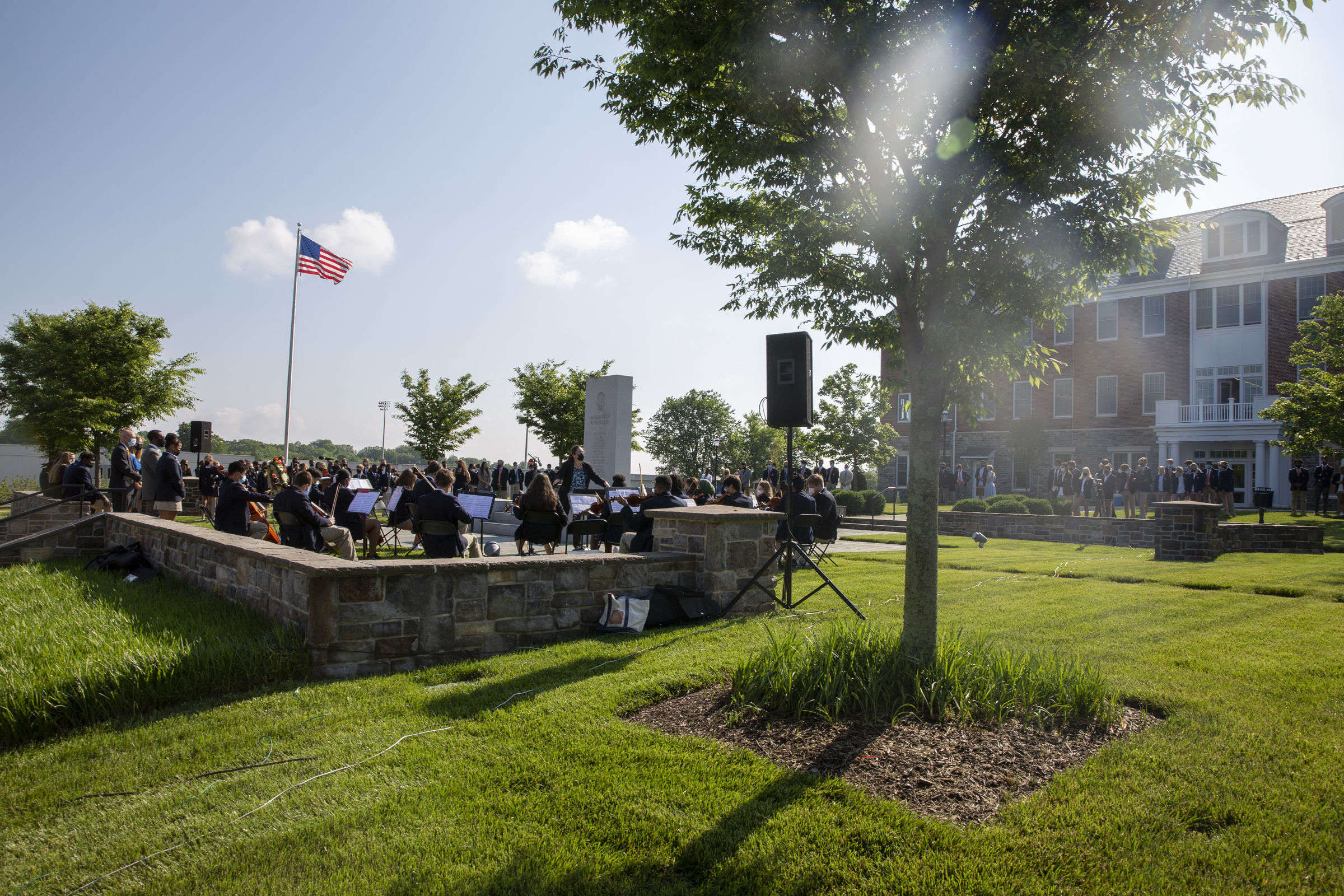 As has been done for the past 75 years, the school community gathered to remember members of the McDonogh Family who gave their lives in service to our country. The rising senior class stood together at Memorial Court while others gathered in classrooms and offices to watch a livestream of the 2021 Memorial Day ceremony on Thursday, May 27.

Head of School Dave Farace ’87 began the ceremony with a warm welcome and then briefly shared the history of the sacred space. He noted that Memorial Court was dedicated on November 22, 1946, during halftime of the McDonogh versus Severn football game, and that the nine-foot granite monument was added at a later date to include the names McDonogh’s Gold Star Heroes—those killed in action. He also shared that Memorial Court was refurbished in 2015, which included the addition of a base inscribed with the names of McDonogh alumni who lost their lives in Korea and Vietnam.

After Anthony Redfern ’25 introduced the invocation, Bridget Collins '90, The Charles W. Britton Director of Character and Service, used the occasion to share the story of John T. Kibler, Jr. ‘41, one of 70 alumni whose names are inscribed on the memorial. After sharing his McDonogh history, she explained that Lt. Kibler was killed in action on October 15, 1944, only five weeks after his enlistment. “His plane went down over hostile territory while flying an escort for heavy bombers who were en route to a bombing raid on Cologne, Germany. He was only 22 years old,” Collins said. Read the full story here.

Following the singing of When the Angels Call Me Home by the Lower School Concert Choir, and in keeping with tradition, a handful of students and alumni (US Army Staff Sergeant Abbott Ottinger ‘12, Abby Nevin ‘22, Leila K. ’25, and Noelle W. ‘29) recited the poem, The McDonogh Uniform, written by Eustace Glascock, a member of the McDonogh Class of 1879.

The 2021 Memorial Day ceremony concluded with Alumni Association President Josh Thomas ‘06 and rising Senior Class President Sydney Smith ’22 placing a wreath at the monument to honor our McDonogh veterans. After the playing of Taps and the benediction, introduced by Ellie Byram ‘22, the audience dismissed in silence as the Upper School Strings played Finlandia.

Throughout the rest of the day, students and guests visited a display curated by military historian Butch Maisel ‘72. The exhibit included an extraordinary collection of World War II artifacts related to Lt. Kibler, his unit, and the life of the typical American soldier.