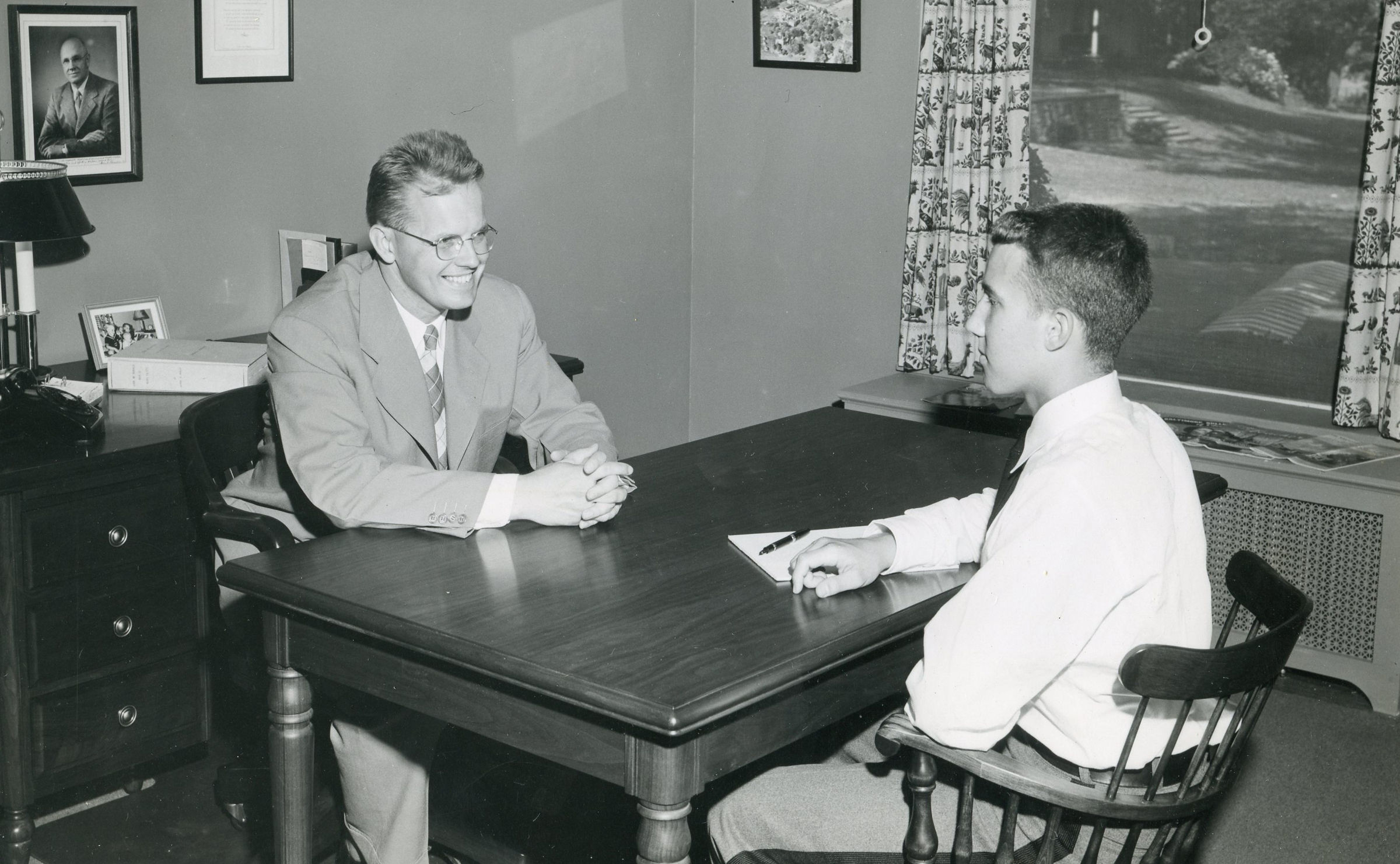 McDonogh School mourns the death of Dr. Robert L. “Bob” Lamborn, a graduate of the Class of 1935 and Headmaster of McDonogh from 1952 to 1972, who passed away peacefully on February 11, 2021. A remarkably talented man and a visionary leader, Bob had a profoundly positive impact on the life of the School.

In celebration of Bob’s 100th birthday in 2018, this video tribute was shown during Reunion Weekend.

The son of Louis E. “Doc” Lamborn, Headmaster of McDonogh from 1926 to 1952, Bob arrived on campus as a seven-year-old child. The family made their home in the Bowman House on Shell Road, and Bob settled into a tiny bedroom on the third floor. He spent his time exploring and playing on campus, riding his pony, Jude, and attending a special class created for him and three other boys who, at the time, were too young to attend regular classes. Bob was the youngest of the group and the only one of the four to graduate from McDonogh.

Bob demonstrated leadership skills early on, attending meetings of the Board of Trustees at age nine, and serving as the Recording Secretary of the Board by the time he was 14. In the decades to come, Bob would distinguish himself as a student, teacher, athlete, coach, military man, headmaster, writer, and consultant. In a post-retirement interview, Bob said, “I am proud that my accomplishments were of a high level. I stayed at that level from the time I was a little kid for quite a while. It feels good.”

Bob graduated from McDonogh in 1935, earning his diploma one year early by skipping his junior year. He received summer tutoring and carried extra courses during the first half of his senior year, then added college coursework at Johns Hopkins University during the second half. By the end of the summer of 1935, Bob had completed high school and the first year of college. The caption beneath his yearbook photo describes him as “a lad of far-reaching knowledge and deep-seated intellect” and “a modest fellow, never striving for selfish or individual profits.” He was also described as an accomplished equestrian who was Captain of the Cavalry and a member of the Show Team from 1933 to 1935.

Having completed his first year of college at Hopkins, Bob moved on to Stanford University and earned an A.B. in Philosophy in three years. He graduated in 1938 “with great distinction” and was elected to Phi Beta Kappa. While a student at Stanford, he was a member of the varsity polo team and served as president of both his dormitory, Sequoia Hall, and the Sequoia Eating Club. A caption above a yearbook photo of him reads, “Bob Lamborn, a better-than-a-B student, is one of the best liked men on the campus and is especially popular at Sequoia, which is surprising since they have to live with him.”

Continuing on to graduate school, Bob enrolled at Harvard University in 1939 to pursue an M.Ed. in Secondary School Administration. He completed his degree two years later, was elected to Phi Delta Kappa, and was awarded the Phi Delta Kappa Prize for Distinction in Studies for the Degree of Master in Secondary School Administration. In an interview years later, Bob stated, “The program at Harvard was solely what was needed for me to become a headmaster...a headmaster at McDonogh. It was never a question of my becoming a headmaster any place else.”

Bob’s quest to lead McDonogh continued in earnest as he returned to campus in 1941. During the next two years, he gained important experience as a teacher, the Head of Middle School, the Head of Upper School, and Assistant Headmaster. In 1943, he took a three-year leave of absence from McDonogh School and entered military service as a Volunteer Officer Candidate. Bob graduated from Officer Candidate School (OCS) “with great distinction” and was assigned to the Red River Ordnance Depot in Texarkana, Texas. Among his many duties, he served as a training instructor, information and education officer, map-reading specialist, defense counsel for courts-martial, and redeployment officer. He received the highest-possible efficiency index for his service throughout his time as an officer, was recommended for the Legion of Merit award, and received an Army Commendation Medal “for meritorious service.” The commanding officer, impressed with Bob’s character and capabilities, said to him, “If I had a son, Lamborn, I’d send him to your school.” Bob was discharged as a first lieutenant in 1946.

Returning to civilian status provided Bob with the opportunity to return to McDonogh as well. During the next six years, with his father “Doc” as Headmaster, Bob served as a sophomore English teacher, Associate Headmaster, and Principal. Ever the equestrian, he also coached riding and polo.

From 1948 to 1951, Bob pursued doctoral studies at Hopkins and earned an Ed.D. in Personal Adjustment and Guidance. His dissertation was selected by the National Association of Secondary School Principals to be listed in the bibliography of “Best Books in 1952 in Vocational Guidance.” It was also summarized in a pamphlet entitled, “Guidance for Boys” which received “wide and creditable professional attention” (McDonogh School: An Interpretive Chronology).

On February 11, 1952, the following notation appeared in the minutes of a meeting of McDonogh’s Board of Trustees:

“Upon motion duly made, seconded, and adopted, it was decided that the retirement of Louis E. Lamborn as Headmaster and the appointment of Robert L. Lamborn as the successor Headmaster should be made known to the school faculty, the patrons, and the public generally on Commencement Day…”

With that appointment, the second half of the Lamborn era at McDonogh began. Bob served the School as Headmaster from 1952 to 1972. He  led the school through turbulent times but never lost sight of his goal of making McDonogh “the best place for a young man to grow.” Under his leadership, the school’s academic program improved significantly and focused primarily on preparing students for college. McDonogh also adopted the “4-4-4 Plan” which created a Lower, Middle, and Upper School of four grades each. This reorganization resulted in the formation of one of the first middle schools in the country and paved the way for the national middle school movement.

Bob also oversaw racial integration at McDonogh as well as the school’s conversion from a military to a civilian model. In addition, he laid the groundwork for the admission of female students. During Bob’s tenure, several new buildings and athletic fields were constructed to support the school’s growth. Among those additions were Elderkin Hall; Lamborn Hall (named for “Doc”); Rollins, Jane Bay, and South (now Keelty) Halls; Logan Fields, Rollins Court, Childs Memorial Court, and an indoor swimming pool. Faculty housing in the Hunt and Bird apartments and family homes on Chapel Hill Drive were constructed as well.

Looking back on his career at McDonogh, Bob said, “I am most proud of the fact that my father and I took McDonogh from what it was in 1926 to what it was in 1972. We had, between us, the second half-century of the school’s existence. We made a mutual pledge that we would do as much as we could for McDonogh as long as we were permitted to have a chance. Each of us was credited with saving the school once, through three wars and the Depression. I want it considered as a joint undertaking between Doc and Bob.”

In 1985, Bob was honored by the McDonogh Alumni Association with the Distinguished Service Award. The chairman of the Awards Committee, teacher and coach Raymond B. Oliver said, “The Alumni Association pauses tonight to pay tribute to the decades of leadership and guidance that Bob gave to McDonogh. His determination; his vision of the school’s future; his commitment to the ideals of John McDonogh; his encouragement of excellent teaching; his unfailing desire to do what was best, not what was expedient; his unfailing energy and enthusiasm for the task at hand; his wisdom, his concern, his love for the school; these are the traits which bring to Bob the praise and the appreciation of those students, and faculty, and friends who shared with him an important epoch in McDonogh history.”

After his departure as Headmaster, Bob assumed leadership positions with various organizations dedicated to the advancement of education. He was the first full-time Executive Director of the Council for American Private Education (CAPE) and the first co-chair and president of the Association of Independent Maryland Schools (AIMS). He also served on the committee that founded the National Association of Independent Schools (NAIS).

Always physically active, Bob became an avid cyclist and promoter of the sport after he retired. He and his wife Barbara began riding in 1984 and, over the course of the next  21 years, rode a combined total of more than 97,000 miles through 42 states and 11 foreign countries. Bob became an instructor, speaker, writer, advisor, consultant, map maker, and event planner for the national cycling community. He and Barbara served as authors and speakers on topics related to cycling, fitness, and positive lifestyles. Together, they designed a 2,500-mile bicycle route through the Delmarva Peninsula and published it as a map entitled The Great Delmarva Bicycling Trail.

In addition to biking the roadways, Bob and Barbara walked the runways of fashion. Each became a model, although Bob had not planned on auditioning for a modeling position at the outset. In 1986, he drove Barbara to a casting call and was surprised to learn that the agent was looking for couples as well. The agent asked if Bob was interested and, with that, Bob’s modeling career began. Sometimes with Barbara and sometimes alone, Bob appeared in print shots, motion pictures, taped sequences, and personal appearances for various promotional purposes. Bob also served as an extra in a pilot for a television show and as an actor in a TV advertising program.

Bob Lamborn dedicated himself to achieving and maintaining a standard of excellence in everything he did. He devoted his time and energy to the growth and success of McDonogh School. “McDonogh is Bob; Bob McDonogh,” states a line from the 1972 Legacy, which was dedicated to him. In recognition of his many contributions to the school and to honor his legacy, McDonogh changed the name of the former Woods Road to Bob Lamborn Road.

Bob was fond of the quotation, “A man is the difference he makes.” Those who knew and worked with Bob can attest to his enormous energy, unfailing enthusiasm, and the powerful difference he made in the life of McDonogh School.

Bob is survived by a daughter, Kathleen Lamborn (Pavel Lomen, deceased) of Ashland, Oregon; and a son, Alan Lamborn ‘64 (Joan) of Fort Collins, Colorado. Bob’s son Jeffrey Lamborn ‘67 (Beckie, a current and longtime McDonogh faculty member) of Stevenson, Maryland, passed away in 2017. He is also survived by nine grandchildren including Garrett Lamborn ‘05 and Taylor Lamborn ‘07. Barbara, his wife of 33 years, died in 2015. His first marriage to Dorothy Rundle Lamborn ended in divorce.

In lieu of flowers, it was Bob's wish that memorial contributions be made to the Robert L. Lamborn Testimonial Fund for Cultural Affairs at McDonogh. This fund provides support for culturally educational events in all three divisions of the School. It was established by Paul Gebelein '38 in honor of Bob Lamborn.